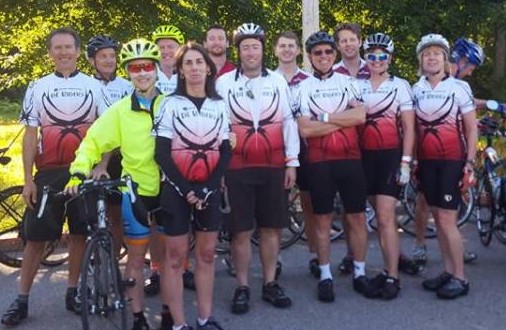 Employees and friends of DiPrete Engineering recently participated in the National Multiple Sclerosis Society’s annual Bike MS: Ride the Rhode event held June 18-19, raising a total of $14,145 that will support research to help find a cure for multiple sclerosis.

DiPrete Engineering employees have formed the core of the PT riders team that has participated in the MS Society’s 150-mile bike ride for the past 11 years after being introduced to the ride by Dennis DiPrete, Principal of DiPrete Engineering.

This year a dozen cyclists from the PT Riders participated in the ride that began at the University of Rhode Island (URI) and looped through Narragansett, North Kingstown, Exeter, Hopkinton and Richmond before returning to South Kingstown. On the second day, bikers rode to Westerly, Charlestown, and the South County beach area before heading back to URI. The PT Riders were among the top five fundraising teams in Rhode Island.

“We encourage all of our employees, friends, and family to join the ride,” said Dennis. “We have been a strong supporter of the National Multiple Sclerosis Society for years, and look forward to this ride each summer.”

In addition to helping find a cure for multiple sclerosis, donations raised through the Bike MS event go toward providing direct support and financial assistance for medications and medical equipment for those living with multiple sclerosis.

“We are beyond proud and thankful for everyone who contributed to DiPrete Engineering’s fundraising effort for Bike MS: Ride the Rhode 2016 and look forward to another successful year in 2017,” added Dennis.