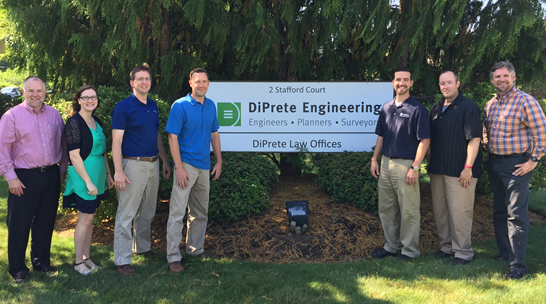 Senior Survey Project Manager, Michael Gavitt, marked 20 years with DiPrete on May 22. Michael has been with the firm since finishing up his bachelor’s in civil engineering from URI.

“I started working with DiPrete the day after graduation,” said Michael, while taking courses alongside VP Chris Duhamel, who was working on his master’s degree at the time. Duhamel suggested he come work for DiPrete, and 20 years later he’s still here — and happy.

“Land surveying never gets boring,” he added.  “I’m always finding new challenges to take on and new areas in which to achieve.  Learning new things and solving new problems makes the work engaging and rewarding. Every project is different.  I like when we get projects that are out of the ordinary.”

One project of note was the Rhode Island sewer system upgrades in 2013, which required quality-control checks and confined-space training for crews.

“Crew members were going into pipes that were about 30 feet underground,” said Michael.  “We also worked on a project in 2007 on a new Instrument Landing System at T.F. Green airport that would help pilots with landing approaches.  Crews were working on the side of the runway doing stakeouts to precise monitoring points for the system, which was also very unique for DiPrete.”

“There has been a big push on jobs in Massachusetts lately, as well,” he added.  “The firm is also looking further north to New Hampshire.  In April, I passed the test to be a licensed land surveyor in the Granite State. The work at DiPrete is ever-evolving.”

Michael lives in Warwick with his wife, Sheri, 14 year old son and 11 year old daughter and is active with his son’s boy scout troop.

Other employees celebrating milestone anniversaries with the company this year:

Be on the look for additional employee spotlights in future e-news articles!