The New England Institute of Technology is taking another step toward realizing its dream of creating a full-scale college campus on the East Greenwich site it purchased about seven years ago. 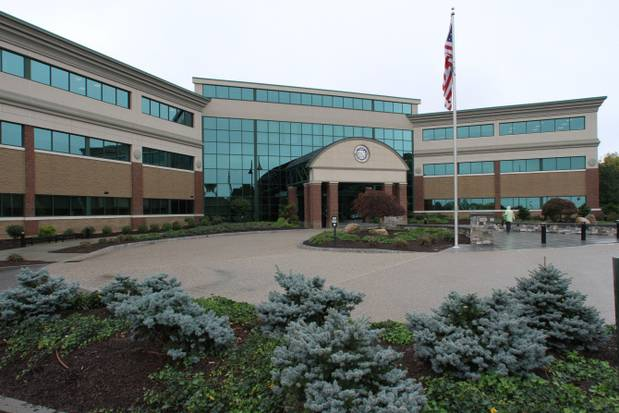 One building is now on the property, consisting of roughly 280,000 square feet of space dedicated to classrooms, technical labs, medical suites for training simulations, and administrative services.

On Tuesday, college President Richard I. Gouse announced that New England Tech is about to embark on a $120-million expansion project that will add more amenities for students at the East Greenwich location — including the college’s first dormitory.

“On behalf of our entire college community, I am pleased to announce this commitment to our students, faculty and staff,” Gouse said.

It’s an exciting move for the school, which has always been a commuter college, he said.

In addition to the East Greenwich campus, New England Tech also has two locations in Warwick. Gouse said that the different programs at the three locations are all thriving.

The sleek East Greenwich building originally was intended to be the corporate headquarters for the Brooks-Eckerd drugstore chain.

It was unfinished when New England Tech acquired it, so the school was able to customize the interior, creating technical labs and an open atrium with multi-tiered waterfall.

Gouse and Steven Kitchin, the school’s vice president for corporate education and training, said that the new expansion project would probably take about three years to complete, with the new 400-bed dormitory slated to open in 2017.

While that commitment continues, the building of the school’s first dormitory (which will be for freshmen) signals that New England Tech’s growing curriculum is making it attractive to students from farther away, he said.

Gouse said that the college has done research and is confident that students from other states are interested in going to New England Tech.

He and Kitchin said that some of the courses that attract the most attention are the school’s information technology offerings such as game development and multimedia web design.

In addition to the college’s first dormitory, the expansion of the East Greenwich campus will include adding on to the existing building to create more instructional space, creating a “green space” courtyard, a new student dining area and new recreation facilities, Gouse said.

He said that the campus expansion will “place our college at the most advanced levels of work-force training for 21st-century employment.”

Earlier this week, the school learned that it had won a second $2.5-million federal grant to expand the shipbuilding and advanced manufacturing institute it created last year with a prior federal funding.

The school currently has about 3,000 students and offers degrees on the associate’s, bachelor’s and master’s levels in more than 40 technical and business programs. It also has online curriculum and does job training for specific companies on a contract basis.

Gouse, who has been the school’s president since 1971, said it is hard to believe that the school, which started 74 years ago in an old factory building in Providence, has three locations and is on its way to developing a full residential campus.

He noted that since 2005, about 12,000 students have graduated from New England Tech and found careers in more than 4,000 companies — half of which are in Rhode Island.

Kitchin said that even as the college keeps up with technology and expands its programs, it remains true to its mission to “prepare our graduates for professional and technical careers.”

To that end, Gouse said, it maintains associate degree programs in fundamental technical areas such as plumbing and heating ventilation work. Students graduate from those programs ready for well-paying jobs, he said.

The school currently is using only a small portion of its roughly 225-acre property in East Greenwich, which includes most of the former Rocky Hill Fairgrounds and the East Greenwich Golf and Country Club. (The school maintains and operates the golf course.)
Gouse said that it will take decades for the school to fully develop the East Greenwich property but added that “we are very patient, determined and focused.”

The school has a long-range plan for the campus development and it shared that vision with the Town of East Greenwich seven years ago when it purchased the property.

In 2010 it reached an agreement with the town under which the private, nonprofit school pays the community roughly $9 million in return for taking more than 200 acres off the tax rolls.

It opened the East Greenwich building to students in the summer of 2011.

In Warwick, New England Tech has property on Post Road and a second location at the end of Access Road near Route 95, where its large automotive center and wind turbine are visible from the highway.

Click here to see this article in the Providence Journal