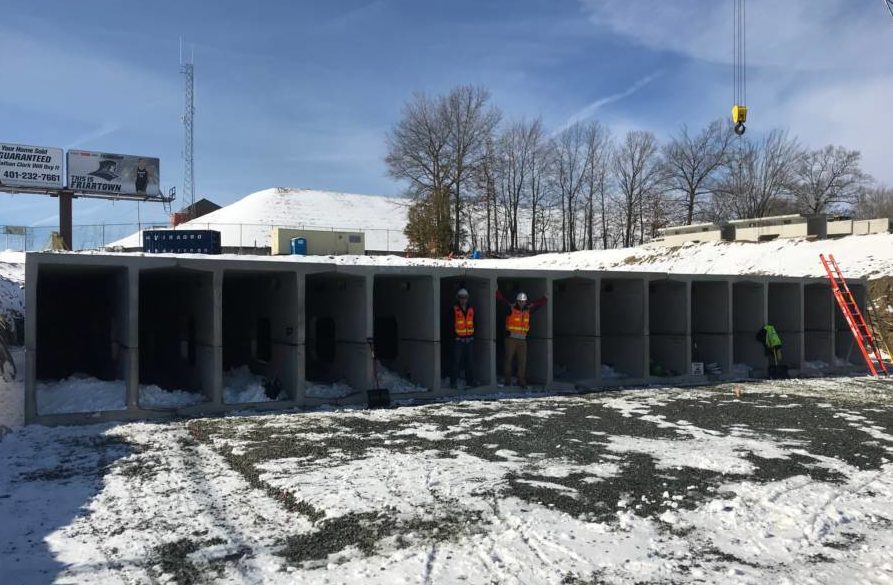 DiPrete Engineering teamed up with StormTrap and J.R. Vinagro Corporation, to design and install the new system.

Because the area is already densely developed and the existing state stormwater system within Mineral Spring Avenue has been maxed out, an oversized system was developed to provide the required treatment and detention necessary for the development.

“We were working with a very aggressive site layout that left us little room for stormwater treatment,” said Brandon Carr, Project Manager at DiPrete Engineering. “That, coupled with the high groundwater levels and the elevation changes on site, forced us to seek an innovative method to manage stormwater. There was no room left on the surface so we knew we had to go underground.”

“We worked directly with StormTrap to develop a system that would be efficient and cost effective,” added Brandon. “The tank was designed to counter the forces of the groundwater pushing up on the system. The result is the largest StormTrap system ever installed in Rhode Island.”

The new stormwater system was manufactured off site and delivered in 296 separate pieces that were then covered in a membrane to keep groundwater out while allowing gradual emptying over several days. J.R. Vinagro Corporation is coordinating deliveries and placing the units for install.

“Coordination was a vital aspect of the project considering the drainage design centers around a complex new StormTrap system,” said Tracy Loftus, Project Manager at J.R. Vinagro Corporation. “This is one of the first installations in the State and we have worked closely with DiPrete and the StormTrap team to work through this process as safely and efficiently as possible. Site constraints and weather conditions have added to the complexity of the install but J.R. Vinagro’s experienced team on the ground is excited to see the final product within the next few weeks.”

The underground basin is currently being assembled and should take less than a month to install.