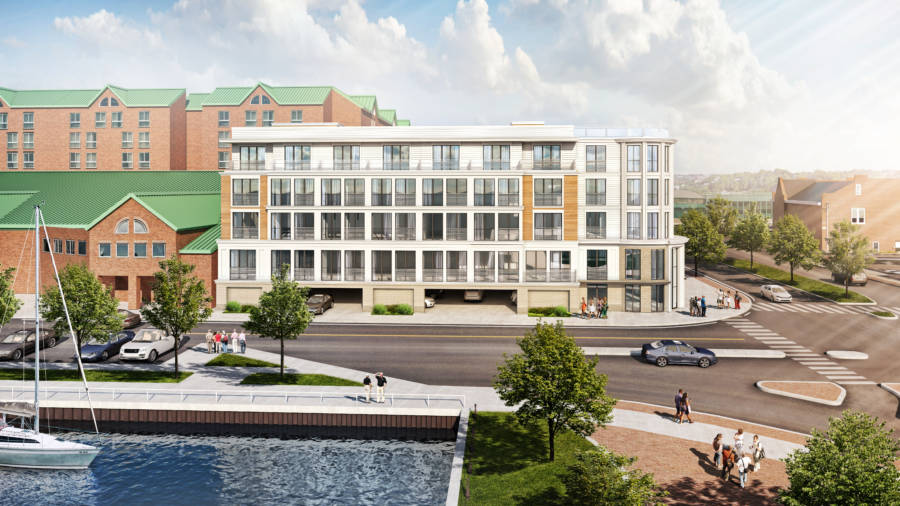 Brenton Hotel Rendering by Group One of Boston

Plans for a new 57-room, four-story hotel in Newport, RI are moving along. Located at the corner of Long Wharf and America’s Cup Avenue, the new hotel will replace a two-story building which formerly housed a Hooley store and the Corcoran, Peckham, Hayes, Leys & Olaynack PC Law Firm. Developers of the proposed hotel, Farrar Equities, LLC and Crosspoint Associates, Inc., have named the upscale boutique property the ‘Brenton Hotel’ after Brenton Reef located at the entrance to Narragansett Bay.

The property will feature architectural details that honor the historic buildings of Newport, while its guestrooms and suites will provide modern comforts with a high level of luxury. A lounge, dining, and common area will be located on the first floor. Farrar and Crosspoint have teamed with Dan Paquette, CEO of Sterling Construction Management, LLC and Behan Brothers, Inc., General Contractors, to construct the hotel. The team is also working with Group One Partners of Boston and DiPrete Engineering.

DiPrete Engineering provided engineering and surveying services, and worked closely with the developers to secure permits for the project from the Coastal Resources Management Council (CRMC), the City of Newport and the Rhode Island Department of Transportation (RIDOT).