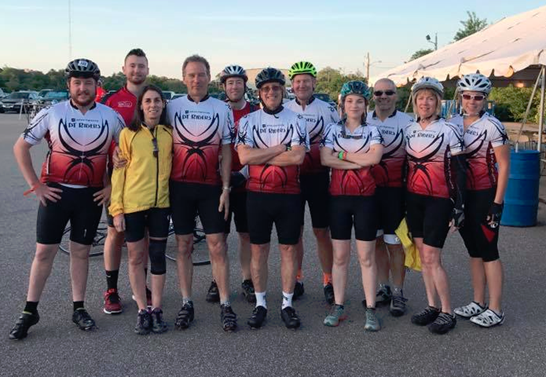 This year marked DiPrete’s 12th MS Society bike ride. The team was introduced to the ride by President, Dennis DiPrete who started riding with the PT Riders bike team after his sister-in-law, Pegi, was diagnosed with Multiple Sclerosis.

12 cyclists from the PT Riders participated in the two-day ride which began in Newport and finished at the University of Rhode Island in Kingston.  The PT Riders were among the top ten fundraising teams in Rhode Island.

“Bike MS: Ride the Rhode is a great event and something we look forward to every summer,” said Dennis DiPrete, Principal of DiPrete Engineering. “Each year, more new faces want to join our team, and we encourage them to do so. Over the years our employees have volunteered a great deal of their time not only for the bike tour, but for other fundraisers that support the National Multiple Sclerosis Society.”

Since 2005, DiPrete Engineering has raised over $255,000 for the National Multiple Sclerosis Society through the Bike MS event, golf tournaments, and wine tastings.

In addition to helping find a cure for multiple sclerosis, donations raised through the Bike MS event go toward providing direct support and financial assistance for medications and medical equipment for those living with multiple sclerosis.

“We are very grateful to those who have shown continued support and to those who contributed this year,” added DiPrete.  “We are looking forward to yet another successful bike ride in 2018.”