Karen King and her circle of Girl Scouts

Here at DiPrete Engineering we enjoy giving back to the community, and what better way to do so than through Scouting? A handful of our team members are involved in Boy Scout and Girl Scout programs that help the youth of our region build courage, confidence and character to make the world a better place.

Len Bradley, Vice President at DiPrete and Scoutmaster of Troop 1 Arnold Mills in Cumberland, has two sons involved in Scouting. His oldest son Sean recently earned the rank of Eagle and his youngest Daniel currently holds the rank of Star and is working on his Life rank. Like many others, Scouting has taught Len and his family leadership skills, self-reliance, civic responsibilities and outdoor skills. These skills are engrained in Scouts through the Scout Oath, Law, Motto and Slogan as well as Rank advancement and the many Merit Badges available for the Scouts to achieve.

“I believe the Scouting program is important to today’s youth because it offers an opportunity for boys and girls to explore and experience life in a unique way,” said Len. “There are many distractions nowadays that pull our youth in different directions (not always positive) such as video games, social media, the internet, television, and movies. Scouting offers an opportunity to explore all that the world has to offer.”

Many of our team members at DiPrete use the skills they learned through Scouting on a daily basis and continue to learn from the program today.

“The Girl Scout program is not just about cookies and camping, it is designed as a leadership experience for girls,” said Karen King, Managing Director of Administration at DiPrete. “A side benefit for adult volunteers is that we develop our own leadership skills by working with the girls.”

Karen started as a Girl Scout troop leader in 2003 when her daughter Maggie was in third grade. She later became the Program Coordinator for the North Kingstown/Jamestown Service Unit and is now the Service Unit Manager and a GSSNE Trainer.

“I’ve had great mentors that helped me learn new skills that I am now passing onto new leaders,” added Karen.  “I also enjoy working with girls and providing opportunities for them to learn, grow, and have fun.”

Jason Clough, Senior Project Engineer, agrees that the Scouting program offers youth opportunities and experiences that they might otherwise not receive. A former Scout himself, Jason grew up in Vermont and was part of Boy Scout Troup 778 in the Town of Bradford.

“There are many adventures that I had as a Boy Scout that I would have never had if I wasn’t involved in Scouting,” said Jason. “Some notable highlights included two trips to the Boy Scout High Adventure Sea Base in the Florida Keys, one trip to Philmont Scout Ranch in New Mexico and attaining the rank of Eagle Scout.”

Though Jason is not currently involved in Scouting, he is supportive of local fund raising and food drive efforts.

Currently involved in Scouting is Senior Survey Project Manager, Mike Gavitt. His son, Alex of Troop 2, East Greenwich is currently at the Life rank and working towards Eagle. Mike is a member of the Troop’s committee attending all of their weekly meetings and the majority of campouts. Along with skills such as leadership and communication, Mike sees Scouting as an opportunity to network and build lifelong friendships.

“I think that the sense of community is one of the overlooked benefits of Scouting,” said Mike.  “Some kids might only have school and sports circles to run in.  Scouting not only ties those circles together but also opens up a much larger circle to what is important in life – helping others, civic responsibility, environmental awareness, and exposure to topics that might spark interest in a future vocation through earning merit badges.”

While Scouts have adult Troop Leaders to mentor them, it’s really the founding mantra of ‘boys leading boys’ and ‘girls leading girls’ that keeps the program going and the reason people continue to join it.

New to Scouting is Senior Project Engineer, Brian Giroux’s son Harrison who joined the program this year as a Tiger Cub for Pack 5 in East Providence.  Brian is currently the Pack’s Den Leader. 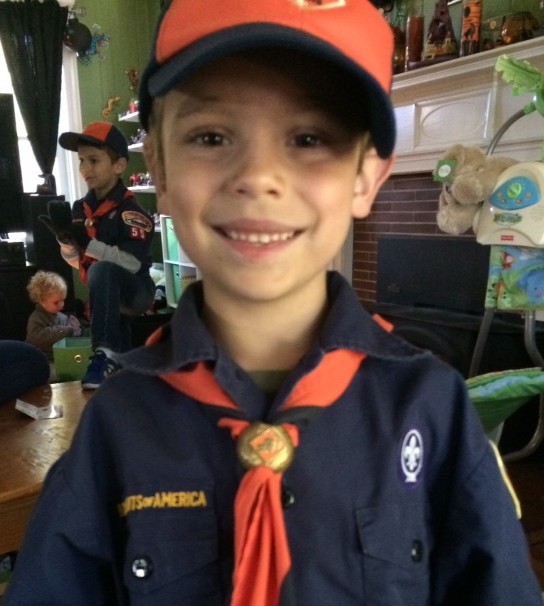 “Harrison has only been a Cub Scout for a couple months and really loves it,” said Brian. “Scouting is a great opportunity for him to work with others as part of a team.  It also helps him to develop skills and provides new opportunities to learn and grow.”

Also very involved in Scouting is Vice President, Kevin Morin’s son Reid, who is now in his second year of Boy Scouts.  Reid has been a Cub Scout since kindergarten for Troop 102 Mapleville and is now a Second Class Boy Scout.  Kevin is a committee member of the Troop and assists on campouts as well as fundraising activities.  His wife Joanne has also led Girl Scout Troop 1035 for their daughter Reese.  The pair are now in their fifth year of Girl Scouts.

“Neither Joanne or I were involved in Scouting growing up but we enjoy seeing our kids gain confidence in learning new skills, making thoughtful decisions, and having fun at the same time,” said Kevin.  “Young adults face a lot of challenges.  Joanne and I try to incorporate self-confidence and good decision-making discussions during our Troops’ meetings.”

Civil/Survey Designer John Raymond is also a father of a Girl Scout. John’s daughter Jasmine has been involved with Scouting since 2014 with Troop 1172 Bristol. She is going on her second year and has earned many badges (and sold many cookies). His son Zachary was also involved in Scouting for four years until pursuing other interests.

“My kids and I have learned many helpful life lessons from Boy Scouts and Girl Scout such as: Responsibility to the Earth and our Environment, Fire-Starting, Whittling and Knife Safety, Gardening, Survival Tricks and Tips, and Hiking Preparedness and Safety,” said John. “They’ve learned social skills that will help them build relationships throughout their lives. Most importantly, they’ve learned how to make a difference.”

“My son Bryan has learned a variety of life skills including camping, fishing, shooting, first aid, citizenship, and cooking,” said CFO Chris Ready. “But the most important skill he learned was leadership.” 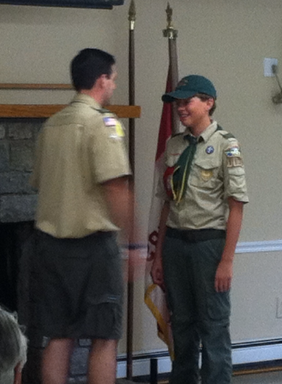 Bryan is part of Troop 1139 Slatersville RI and has been in the Scouting program for 11 years.

“Scouting is a program that instills great values in young people including: respect, loyalty, teamwork and the value of community service,” added Chris. “I look forward to seeing Bryan and his fellow Scouts implement these skills in the real world.”

If you or your child are interested in participating in the Scouting program, please visit: http://www.scouting.org/ or http://www.girlscouts.org/